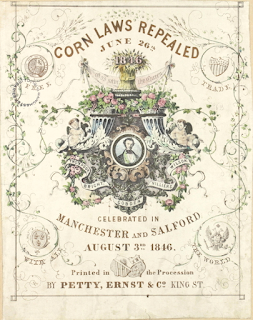 Free Trade as manifested in the repeal of the Corn Laws was a founding event for the Liberal Party. There are signs however that liberals are becoming wary of the phrase. This a clear symptom of the malady that the The Orange Book was seeking to address fourteen years ago. The ailment is that key liberal ideas have been appropriated and distorted by the Conservative Party and in the case of the phrase "Free Trade" by the right wing of that party. So, by association in the minds of many with a weak grasp of history the phrase has become in the UK a right wing Conservative slogan and tainted for that reason.

The phrase "Free Trade" on its own is open to a number of interpretations and requires context to clarify which interpretation is meant. On the Conservative right the freedom being emphasised is freedom from regulation. Liberals have long since moved on from a 19th century laissez-faire philosophy. Freedom should be understood as the liberty of all parties to enter into an exchange or not. This means commerce and trade is in harmony with the core liberal value of individual liberty. Domestically, it has long been recognised that the rule of law is required for competitive markets to flourish. Internationally a system of rules is required to allow trade between and across nations to be effective. Agreements that include harmonisation of regulations are necessary but we should be limiting them where possible to concerns like safety in the food chain or of electrical products, for example. Regulations should not be used to skew advantage to one party or a particular group.

Liberalism is a dynamic and adaptable philosophy. Today's goods and services are of a complexity that makes a laissez-faire approach, suitable for corn, unfit for the exchange of contemporary goods and services.  It is this dynamic and forward looking liberalism that is presented in A manifesto for renewing liberalism. But here too there a sign that the phrase "Free Trade" is not to be used and "Open Markets" used as a replacement. Are we to give in to the loud and strident Conservative right and cease talking directly about Free Trade and its benefits?


No, while looking forward, it is important to mark and take pride in key historical achievements. To the fore among these is the establishment of Free Trade as the engine of growth in the 19th century and then its resurgence after the 2nd World War based on a system of agreements and rules that recognise and protect human freedoms and rights.  So let us not be bullied out of using the phrase and support Free Trade as the strongest economic mechanism yet discovered for fostering growth and relieving poverty.
Posted by KritiK at 09:57 1 comment:
Email ThisBlogThis!Share to TwitterShare to FacebookShare to Pinterest
Newer Posts Older Posts Home
Subscribe to: Posts (Atom)
Loading...