Sustainable Energy - without the hot air: 10 years on

The free to download ebook version of Sustainable Energy — without the hot air was last issued on the 3rd of November 2008. Ten years have passed since this important and influential science based look at sustainable energy was updated. I am sure that if it was not for the early death of David MacKay, he would have built upon this achievement and updated and evolved his position. There have been calls for a collective effort to keep this book up to date, notably from Chris Goodall. This has not gained very much traction but books do tend to need a high level of personal ownership to advance.

Let's look at the approach MacKay took as it has been particularly robust to intervening events. Rather than focus on what 2008 technology could do he used physics to bound what is in principle achievable. He attempted to answer the following question as honestly as possible: how much energy is there to be harvested practically and in a sustainable form? Questions of social, economic and wider environmental impacts were not ignored. These factors lead to MacKay to propose a number of plans, of which the feasibility and affordability will depend on technical and behavioural developments. They each add up to 70 kWh per person per day (estimated consumption in 2008 was 125 kWh per person per day) and are shown below. 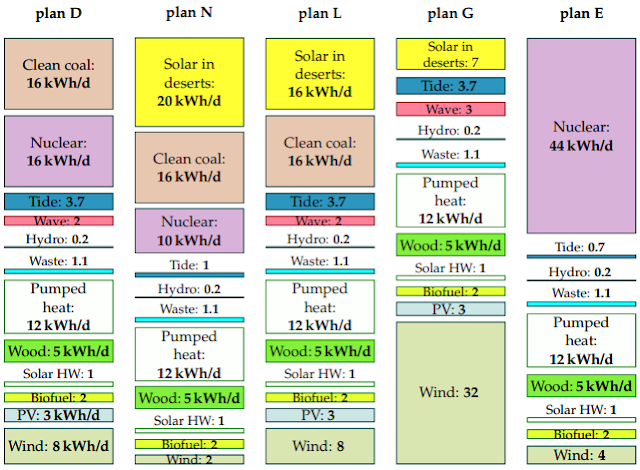 David MacKay provided a ten page summary and the details of the figure above are explained there. The presence of Nuclear and "Clean Coal" will not please environmental purists but MacKay's approach is pragmatic and clear that dealing with climate change will require major sacrifices, of which green sensitivities are not the most onerous. For any of these plans to be feasible MacKay's analysis points to a 25% improvement in heating efficiency and a 50% improvement for transport and other efficiency savings that must reduce overall energy consumption to about 60% of 2008 levels.. His analysis does not show that it will be easy to achieve this nor that it is achievable then or now through established technology.  He does argue persuasively that there no barriers in physics. This analysis lays bare, although largely implicit in the book, the need for political leadership and imagination that will galvanise humanity to meet the challenge.

Let's pause to reflect what an achievement the book was, how well it stands up against developments and what a loss David MacKay's early death was. Since 2008 the acceptance of the evidence for climate change and its human generated causes has gained much wider informed acceptance. The case for a technically grounded response to the challenge has never been stronger and MacKays example needs to be followed and acted upon. Science does not only provide the analysis but also the foundation for the technology that the solution to the climate change challenge will require.
Posted by KritiK at 10:48 No comments:
Email ThisBlogThis!Share to TwitterShare to FacebookShare to Pinterest
Newer Posts Older Posts Home
Subscribe to: Posts (Atom)
Loading...