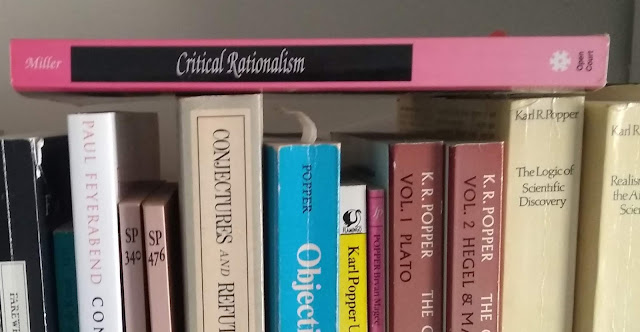 The starting point for this piece is "What use is Popper to a politician?" by Bryan Magee. Magee is a long standing advocate for Popper and therefore the philosophical position known as Critical Rationalism (CR). Without wishing to take away from Poppers contribution, I prefer to use CR and make clear that this is not advocating the opinions of a person but to argue for a constructive philosophical approach to policy formulation.


Magee is that rare thing in the UK a public intellectual who was an elected politician. First as a Labour MP then for the newly formed SDP. The article referred to above was written some 10 years following his career as an MP but is strongly coloured by his social democratic position. He seems blind to the non-social democratic liberal position which is mine. However this is not too grave as the philosophical stance being advocated is available to anyone who is open to rational argument and evidence.  Magee himself mentions Margaret Thatcher as the sort of radical conservative who could open to this approach.


In much of what follows I will follow Magee quite closely but my formulation is adapted to the creation policy proposals and amendments. The sort of work that takes place prior to a party conference. One of my motivations for this piece is dissatisfaction with both the process and with much of the output from this process.


CR itself is a subject with its own extensive literature, but you should be able to pick up the essential points relevant to policy formulation in what follows. CR was developed via a critique of positivism and induction in the natural sciences. It presents the scientific enterprise as an exercise in problem identification and resolution with the important caveat that the solutions are provisional and need to be subjected to continuing critical review. Policy formulation is not a natural science but the recognition of the fallibility of proposed policy proposals should be evident.


So, in policy too, first identify and formulate the problem with care. This means not jumping to solutions or using the issue to display indignation or personal virtue. The articulation should be as clear and jargon free as possible. For example, in the case of health consequence of diet, it is necessary to formulate the problem, if there is one, as objectively as possible. If people are eating too much; that is their concern. If the are eating too much and damaging their health; that too is their concern. If over eating is leading to strains on the health service, leading to higher taxation, then that is potentially a real policy problem and it is possible to start to address it. But even here we do not stop. Having formulated the problem better we can now quantify it. This is not just looking at the evidence but looking at the quality of prognostics and the assumptions made. There are always assumptions.

The next step is to formulate policy proposals. It is the creative step, but based on best available knowledge. This is not just data but economic theory, philosophy, science and knowledge of how government works, and whatever else can be brought to the task. Other softer and more value oriented considerations should not be neglected. For example, ask whether it would be legitimate for free individuals to be constrained through a proposal that addresses a problem by managing a statistical distribution across the whole population. It is not possible to derive a solution for the body of knowledge, hence the creative element. In getting proposals formulated anything goes: debate with yourself, with others, writing Op-Eds and getting feedback, etc. The outcome should be a proposal or set of proposals that is clearly articulated, defendable and actionable. By actionable is meant that a policy is a solution to a problem and therefore if acted upon will, or at least intends, to solve that problem.
Done? No. The proposal needs to be subjected to a further critical analysis. An important mechanism is to try out the proposals against implementation scenarios. This is motivated by the recognition of unintended consequences of a policy. That is, the solution may not be robust to  small changes in the implementation scenario or it may have negative impact if implemented in a certain way. The outcome should be a ranked set of actionable policy proposals with supporting explanations and evidence. But not always.

It is quite possible that after much hard work and critical analysis no actionable policy proposal emerges. So, have we been too critical. Very unlikely. Remember that fallibility at each step is never eliminated.The problem as formulated may not have an actionable solution or the actual problem has not been identified after all. To return to the impact of diet on the health service;  is the problem perhaps with how the health service is structured. For example the health service has no, or weak, personal responsibility mechanisms. The other realisation is that in the end it may be better to do nothing. The process will not have been a waste because you will know why you are proposing no action. However in many and I would anticipate the majority of cases the approach outline here will indeed help in identifying strong and defendable policy proposals.

My main motivation for writing this is the often dismal to poor quality of policy proposal writing.  If in turn you are critical of the CR approach or my formulation of it then you too are participating.  Thank you.