The status of Ergodicity Economics as a minority topic in mathematical economics may be about to change due to the profile it has achieved through a special 'perspective' article published in Nature in December 2019 authored by Ole Peters of the London Mathematical Laboratory.

The article itself provides a clear introduction that presents sufficient mathematics without being overly pedantic. The main point has been well known and put on a rigorous foundation in mathematical physics for several decades. The point being that the time average of a dynamical variable is not equal to the static expectation value over the associated probability distribution over that variable. The claim that this ignored in main stream economics seems incredible given the repeated claims that mathematics has too tight a hold on the subject currently. However the effects that Peters claims does seem to stand up to scrutiny.

The model that is used to illustrate is a simple gamble where with equal probability you can increase your pot (wealth) $W$ by $A$% or lose $B$%. If $A > B$ then the expected outcome is positive and traditionally the gamble is considered acceptable. In general the outcome is
$$<\Delta W> = W \frac{A - B}{2 \times 100} .$$
This simple game of chance could also be thought of as the outcome of a risky investment or a purchase that has associated unknowns.


However when the stakes are high most people are disinclined to accept the such a bet. High stake would mean something like betting your house. A bad outcome would leave you with significantly reduced  total wealth. The rejection of the gamble is often declared irrational as  you are rejecting an expected win.  But something slippery is going on; "expected" is being used in two distinct ways. The ordinary language use means what is likely happen and what is very likely to happen is that either your wealth increase significantly or it decreases significantly. The technical meaning is that it is the average over the probability distribution; Equation for $\Delta W$, above is that average for the gamble discussed.

So this increases exponentially with rate $\sqrt{ a b}$ if $ab > 1$. Let us first consider the example with parameters used by Peters. The result for $a=0.6$ and $b=1.5$ is shown below for $100$ histories. This case shows that for these parameters playing the game leads to almost certain loss, amounting to ruin or almost complete loss of stake, but the expectation value estimate predicts an exponentially growing gain. For these parameters $\sqrt{ab} < 1$ so the analysis has told us to anticipate this. Here anticipation and expectation are not the same. 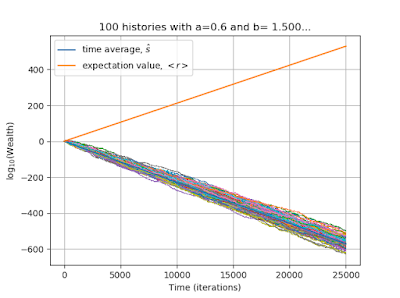 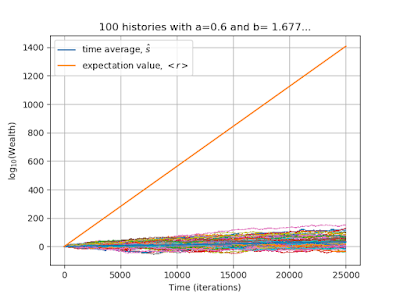 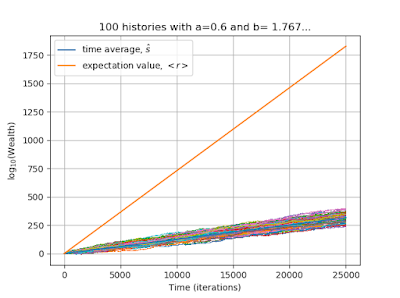 A more realistic gamble such as investment in carefully chosen stock it likely to vary only a few percent between iterations. This is the situation shown below. 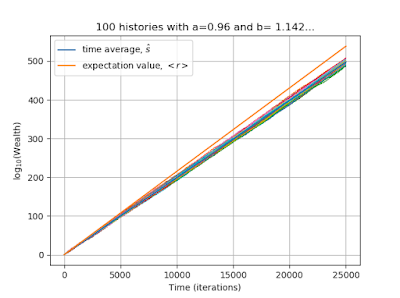 Here when $a$ and $b$ are close there is less uncertainty and the expectation value is not such a terrible estimate as in the previous examples. Perhaps the positive return is unrealistically high. An iterated sample with a 4% loss and 5% gain is shown below. 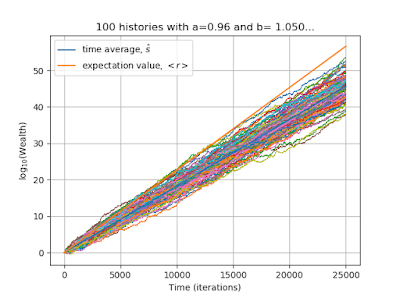 Posted by KritiK at 17:13
Email ThisBlogThis!Share to TwitterShare to FacebookShare to Pinterest